Below are the results and observations and questions raised from my trial using sorbent in a crude version of a DACC (v0.1?)

SORBENT PREP.: ~9.5 grams of sorbent (CAS# 69011-19-4) were crushed for ~10 minutes with a household mortar and pestle. An image of the resulting material under microscope is the flag image of this thread. The resulting powder was not sized using a mesh or anything, but rather all was used in the next step.

The powder was heated to 90C (195F) in a kitchen stove for 48 hours. They were subsequently drained over a glass filter (very small pore size) and transferred to a 1M NaOH solution for 2-3 hours, then drained again over glass filter and washed with distilled water. This cycle was repeated 5 times. Read “moisture swing sorbent for carbon dioxide capture from ambient air” Wang et al. 2011, Env. Science & Tech. for more details (its on the Drive).

After the washes the powder was left to dry. Its mass shrunk to 1.7grams.

CARTRIDGE PREP.: Six Aeropress steel mesh coffee filter circles of unknown mesh size (they were almost invisibly small pore sizes) were used to sandwich the prepped sorbent into three cartridges. Holes were drilled into the cartridge pair so that they could be bolted together in an attempt to make them hermetically sealed and trap the sorbent within. These three cartridges were also attached together (with some space in between to permit airflow) and welded to long rods with sliding stoppers to allow the apparatus to be moved up and down in the chamber. 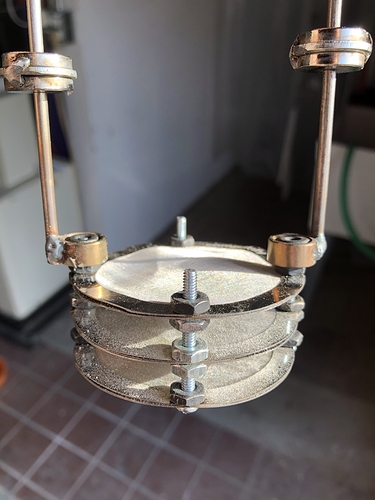 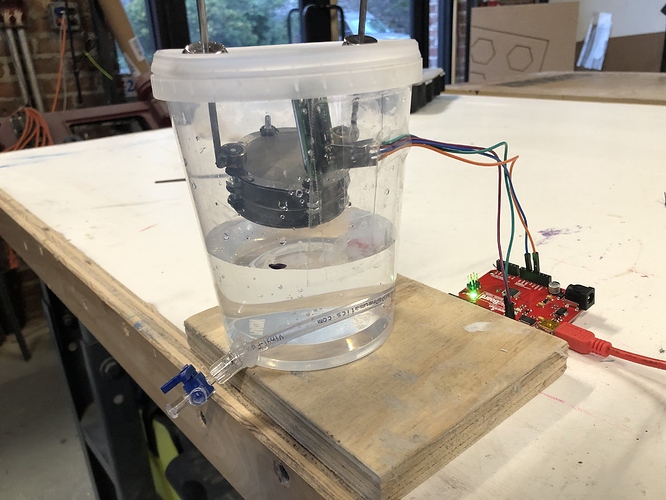 EXPERIMENT: The chamber was filled with enough water to allow complete submersion of the cartridges. The lid was attached and the cartridges were lowered into the water fully at around 8pm. CO2 levels began to rise slowly. After about 30s the cartridge was raised above water and then CO2 began to rise more quickly. It was left here for ~1.5hrs while the arduino serial logger recorded data. After only a half hour the CO2 level reached 3100ppm, up from baseline ~500. The water was drained at this point. The CO2 level predictably declined as the vacuum created sucked ambient air in through any cracks, but then it quickly resumed its rise. The experiment was ceased @ 9:25pm with a reading of 3920ppm. Note that the CO2 level was still rising, albeit slowly at that point (i just had to go home) so its safe to say that the final level would have been more. Once the lid was opened the CO2 readings quickly returned to normal, with a full return to baseline (490ppm) after 5 minutes. This amounts to an 8x increase in CO2 concentration in the chamber. The amount of CO2 that that represents, as well as the ratio of sorbent mass to CO2 adsorbed will be figured once I measure the volume of the chamber (I forgot). Temperature and humidity were ‘recorded’ by the sensor and are shown in the screenshots. 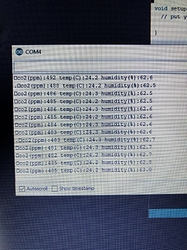 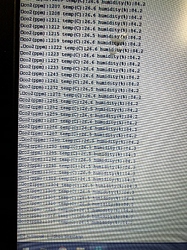 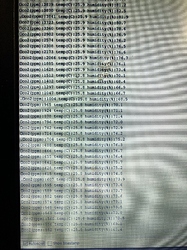 MOVING FORWARD: At this time I think its safe to start planning for an actual full-scale prototype (Violet v1.0), as this experiment demonstrated that we:

I think there were too many variables and unknowns before, and we were operating purely on theory and planning a fancy version based on technology we had not yet vetted. I’m glad we pared it back to bare-bones simply to check on basic stuff like the above.

DISCUSSION: So in general this was a success, and this identified some points worth diving into. I’ve tried to identify variables that are contributing to our degree of success, and these worth exploring and keeping track of in subsequent experiments. They are denoted (Var).

I did a follow-up experiment the next day with now two sensors and the same sorbent/cartridge. The sensors worked fine and read only slightly different from each other. The CO2 levels were dramatically different than from the previous day however. It took dramatically longer (4hours) to reach a peak of only 2100pmm. This leads to several questions.

The sensors worked and it seems that maybe arduino-based might be OK. I know there is talk about better, more accurate ones. Dealing with the arduino wiring and keeping the sensors dry was a pain. I guess we’ll have to weigh the pros and cons of price and open-source versatility. Those SCD30 sensors weren’t cheap either though.

The cartridges left a lot to be desired. They were not hermetically sealed and I could see floating sorbent in the water afterwards. Were the lower CO2 readings due to a simple loss of sorbent? I will open and weigh the remaining sorbent to see how much was lost. Was the presumed lost sorbent due to the mesh screen pore size being too large, or that they weren’t sealed enough at the perimeter? In any event making a better sorbent cartridge is in order. I myself am going to CNC some 18ga steel circles and embed the mesh of known pore size (Var) with liquid gasketing material and bolt them together in many more places than I had to ensure a leak-proof chamber (Var).

The drop could also be due to compromised sorbent chemistry. Did the sorbent revert to its chlorinated state? (Var) I doubt it as while tap water was used, it contains hypochlorite, not chloride, but either way this is beyond our ability to measure. This reversion will happen, eventually, as per Tao’s stated experience, though without knowing when we will have to setup some guidelines.

Did I not wait long enough for the cartridges to dry? I don’t know the state of the cartidges and I guess we are reliant upon stated values from the lit. Also note that my shop is on the water it was ~70-85%
humidity (Var). Considering that, I was surprised that it worked at all! Might want to do future experiments in an air-conditioned room. Or not.

I joked that if i sneezed in the wrong direction I could make the 1.7g of sorbent disappear. This isn’t too far from the truth, and I think it should be a priority to source a LOT of sorbent if we wish to continue to experiment in earnest. With larger setups, the data will be more accurate too, and small losses will become negligible errors vs catastrophic errors.

How to easily export data to Excel or somewhere for analysis or graphs etc.? We should make an integrated spreadsheet that has inputs like chamber volume (Var), sorbent quantity (Var), sorbent size/mesh size (Var), times of exposure (Var), submersion time (Var), etc., so that derived values can be done automatically. We shouldn’t be doing back-of-the-envelope math; there’s a way to streamline this and it will speed up our understanding of our experimental variables. I didn’t do copious data-capture for this experiment as it was just a proof-of-concept.

My whole setup was rather clunky, and I think this will largely go away with a real and solid design. I think we should consider submersion as a method for scrubbing, it seems to work great and wouldn’t require an additional loop.!

This is great progress @PeterLokken and a great result for OpenAir’s VIOLET team! Thanks for taking the lead and driving us to this critical point!! Can you include some links to the equipment you used - at least the sensor and maybe some sorbent ingredients?

@kgubsch (welcome aboard man!) @kristin @chrisc @jfeddersen @madparker would love to get your thoughts on Peter’s results, questions and proposed next steps! What jumps out at you and how do these developments inform our next design steps?

Some sensors can be converted from diffusion to sampling by adding a little manifold ‘hat’. See https://www.co2meter.com/products/k-30-co2-sensor-module, specifically the last photo showing the sensor with pump kit. Something like this would make it easier to keep the sensor out of the sorbent chamber (and dry), and at least on paper looks best suited to our application.

I haven’t found any indication the SCD30 is designed to be converted this way, but it might be possible to adapt a similar cover to direct gas through the sensor - not unlike the box we were at one point trying to house the sensor in.

A quick-and-dirty way to get the gas data out with the current setup would be to format the serial output so that it works as a CSV file - cut and paste. So, just the readings with commas. Other more complete solutions would be writing data to, say, an SD card or reporting the data to something else (server, etc) that logs it in whatever format we want.

@PeterLokken awesome work Peter! I just joined the team last week, but I am excited to see this encouraging result. My background is in chemical engineering, but I also have worked at my university’s (Washington State University) Laboratory for Atmospheric Research for the past four years and I have experience with the k30 CO2 sensors. We connected them to Raspberry Pis and are currently using CO2 as a tracer gas for COVID in classrooms to measure air exchange rates with the k30s as the sensors. I’d be happy to help with anything on the sensor-side of things if needed so please reach out if you are having issues with that.

Another idea for the sensor is that I think there are some free (or very low cost) databases out there for small-scale projects so if the Arduino can be connected to the internet we could have the data be sent to cloud (Azure or Amazon Web Services maybe?) I know my research group did something like that, but I was not involved with that aspect of the project. I also wrote some Python code for a Raspberry Pi that logs data in a CSV form to a file that makes it pretty simple to analyze the data using Python as well as view the graph of CO2 Concentration vs Time in real-time. If the Pi is connected to the internet, you can view and control everything on your laptop using a viewer client like VNC. Anyone would also be able to log into the Pi remotely (with a secure password) to test software.

For chemistry, I agree that more experiments to answer some of your questions sounds great.

Also, sorry I missed the call today. I’ll plan on attending the meetings going forward, but I had some family in town visiting. Is there a place where meeting minutes are being taken so I can review what was discussed? No problem if not. I look forward to seeing how that progresses and I’ll see you all next Monday!

Hey sorry this has taken so long; super busy. Welcome aboard. Not sure how caught up you got at this Monday’s Meeting (I couldn’t attend). We have a group of people with interest/experience in sensor tech and general electrical everything. Jeff Feddersen pops to mind immediately regarding that. Some topics on it involve general questions like which types and levels of precision of sensors to use. How many are necessary to paint an accurate picture of what’s going on, and then more complex passive control-like logic we could introduce like PID loops or some analogous ways to make the DACC “smart”. I also have a work background in chemical engineering and this field will come in play more in the future - once we concentrate the co2, we have to do something with it, and mineralization is a top choice. We will definitely have some interesting discussions regarding this. Hope to see you at the DACc-HACC