On 2/11/02 in the Weekly Violet Meeting (here are the notes, thanks Alex Orse!) we came up with the following protocol for attempting to prep the Amberlite IRA-900 chloride for use as a moisture swing sorbent, based on this paper by Dr. Tao Wang.

Here’s a brief outline of the steps:

To achieve the temperature and soak for 48 hrs, I began the experiment with a sous vide in a large pot. To limit the amount of distilled water needed, I filled a large container with tap water to displace the distilled water in the pot and raise it to a level above the “min” line on the sous vide. I placed the out sorbent in a mesh nut milk bag and placed the bag in the outer reservoir of stilled water. 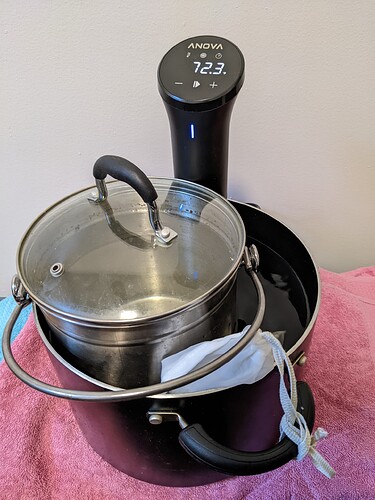 I quickly released there was a better way to do this, since the water was likely to evaporate off if not sealed and I’d have to keep refilling the stilled water (and making it harder to preserve the temperature).

I instead put the distilled water into the container and the sorbent into that inner container and sealed it with a lid. I put tap water in the outer reservoir, which will be easier to refill with more tap water as it more easy to replace. 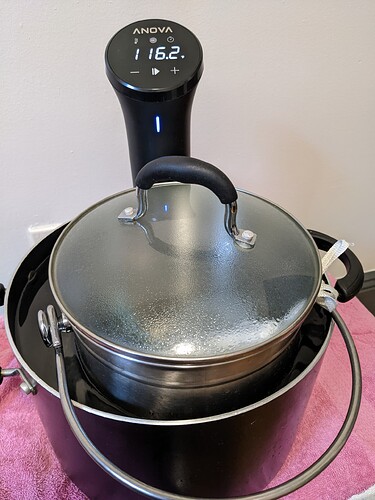 However, the sous vide is not meant to be on for 48 hours at a time and within a few hours it shut it self off and showed an error. I’d already been working on a better solution, which I luckily had ready to go, so I switched over as soon as the sous vide shut down.

I moved to a slow cooker, which on the “low” setting gets to just under 85c, which I feel is close enough to our range. Given that it can be sealed, I just put the nut milk bag into the pot itself with the distilled water (I’ll clean it thoroughly before we use it to cook again 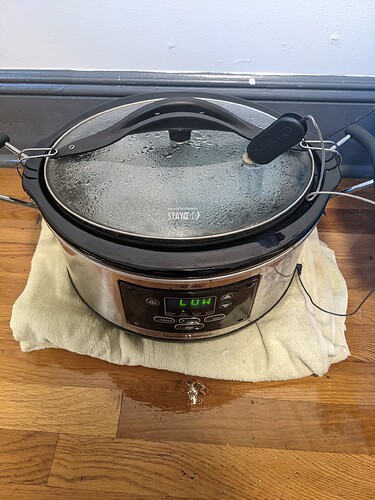 Unfortunately, the slow cooker also turned itself off at some point during the night. I think if I turn it off and back on every 8 hours or so, this shouldn’t happen anymore.

My plan for now is to continue with the soak and start the washing every 2 hours tomorrow morning, which will be 48 hours. It’s not an ideal test, due to the interruptions in heating, but it would also not be a true test to let it soak longer than 48 hours. My plan for now is to continue the soak, attempt to follow the procedure we laid out as closely as possible, and reevaluate after we’ve seen the results.

NOTE: I also decided to soak 20 grams of the sorbent sheets from Tao at the same time, figuring it couldn’t hurt. However, there’s a pretty strong smell going on here and now I can’t tell if that’s the amberlite or tao’s sorbent. The smell isn’t…the worst thing I’ve ever smelled. But it’s strong and it’s not totally pleasant.

Update:
48 hr hot soak complete, on to the washing!

I added 500ml of water and 26.5 grams of sodium carbonate to a container. I removed the soaked sorbent (both Amberlite and Taos sorbent) to the washing solution. I shook it and broke up the sodium carbonate (it tends to clump up once added to water).

NOTE: After speaking with Dr. XaioYu Wu about the temperature to use for the wash, we realized the temperature of the water was not specified in Dr. Wang’s paper, so we’re using room temp water. 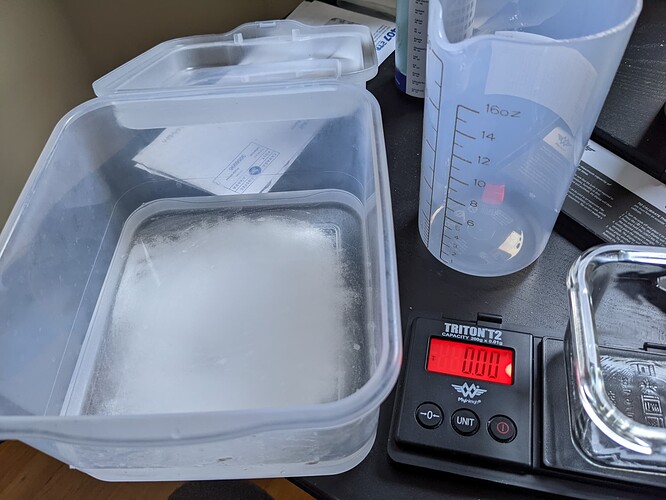 I put the container under a small fan to make sure it was getting constant vibration and I’ll gently shake the container every 10-20 minutes to keep things from settling. 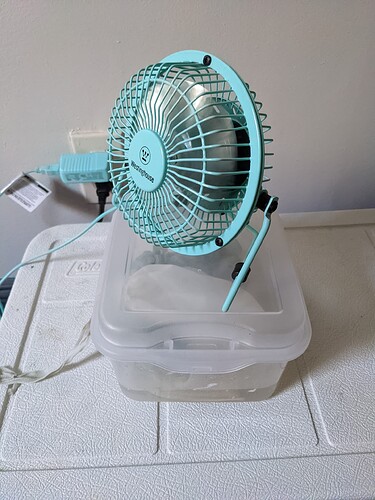 After the first wash, I determined the Tao’s sorbent is no longer viable and removed it. We’ll discuss that in a separate thread here. I did 5 more subsuquant washes without them, otherwise identical to how it was described above. I let the amberlite dry over night, then do a thorough rinse this morning with 500ml of distilled water. I am currently drying it with a fan, will give it 24 hours to dry completely, then test it in the sorbent tester tomorrow. 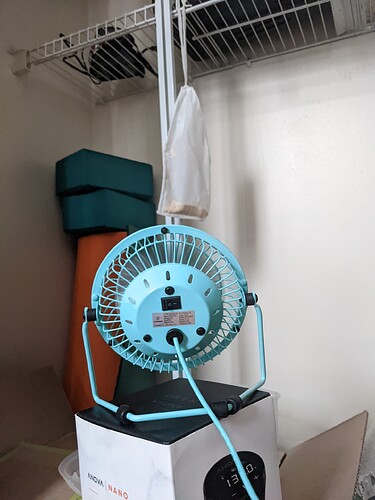 NOTE: If there was lost sorbent in these washes from the nut milk bag, it was undetectable to me. I think either A) all the particles that were small enough to escape the bag came out in the soaking/washing process of B) the lost particles was due to my carelessness. Either way the amount of lost sorbent is tiny and I don’t think this is a major issue for this system.

I preformed 2 seperate sorbent tests, both results can be seen in this spreadsheet:

02/22/22: Performed the first test used 10 grams of sorbent and this is the results chart: 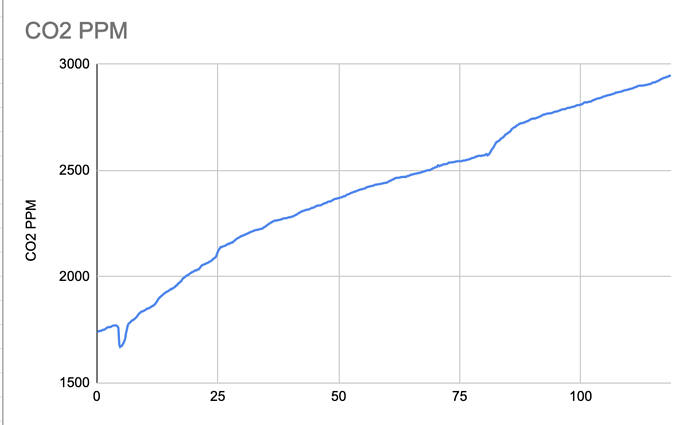 These results were initially disappointing, as they did not show much improvement over previous prep methods. However, at Dr. XiaoYu Wu’s suggestion, I try repeating the experiment with only 1 gram of amberlite.

03/01/22: With 1 gram of sorbent the results are much more encouraging. While the Co2ppm increase is not quite as high, they are similar enough that we believe the results are being effected by our testing equipment/procedure. 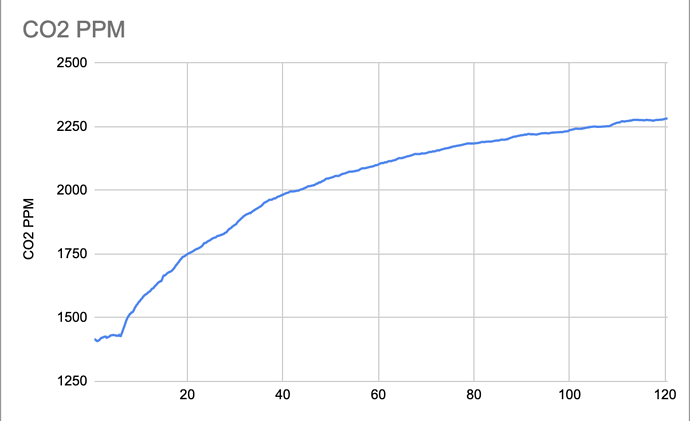 Some possibilities of improving the accuracy of our results are venting and resealing the test chamber periodically or finding a way of measuring co2 in a non-static airflow.

I’ve repeated the sorbent test process, now with the benefit of the chloride sensor. The summary of the findings is that it takes about 6-7 washes with 0.5M solution of sodium chloride to chemically prep the amberlite for carbon removal. Your can see from this graph here of 7 washing cycles that there is a significant drop in the chloride level until the 6-7 wash. Given that at that point we are within 20 ppm of the chloride level prior to washing, that’s probably as good as we can get. 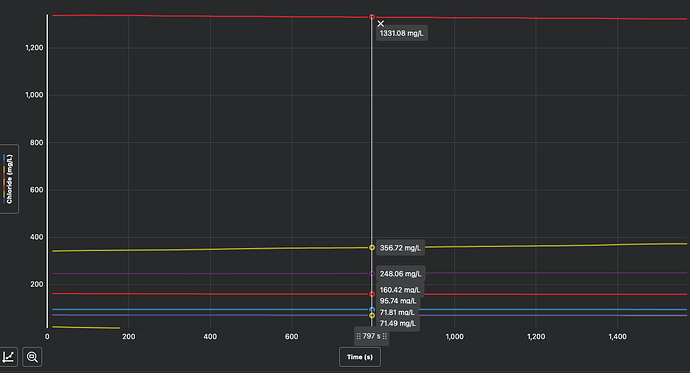 I am beginning to experiment with doing the initial hot soak with .5M sodium carbonate solution instead of just water. Future testing needs to be done to see if 1-2M solution works better.

We also need to do further research into relative volumes of sorbent and solution are effective.