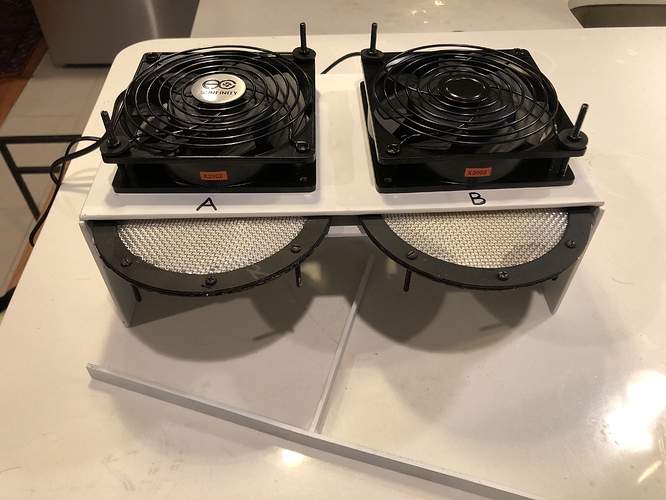 IMG-08704032×3024 1.61 MB
I made a Prep and Testing Chamber, which has side-by-side chambers for making controlled experiments. In this way we can evaluate relative value differences between a variable in question and its control. We’ll get some information on how a condition performed in an absolute sense, but more importantly and more convincingly we’ll get be able to compare the efficacy of a certain condition relative to the control.

Anyway…
I made 2 pairs of circular disks, similar to the ones from before, except a lot larger (~5.5" OD). 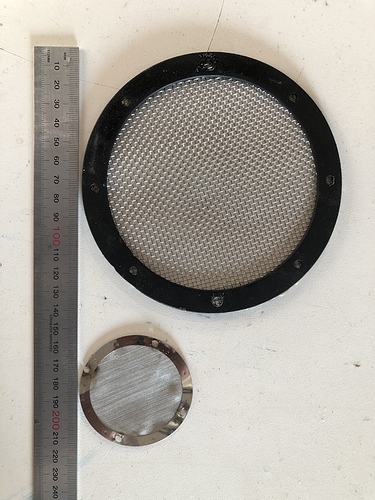 IMG-08313024×4032 2.74 MB
This is something more akin to practical if we are considering using 6" PVC tubing as housing. This was done by making 2 pairs of circular ‘sandwiches’ that contain the sorbent inside. 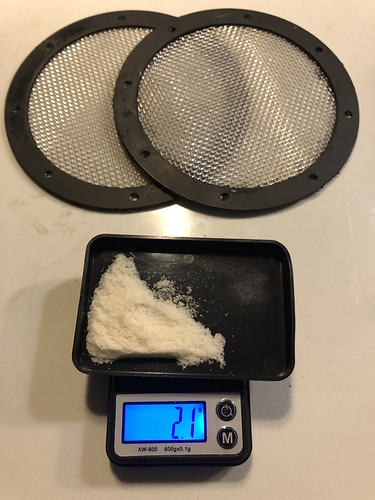 The layers of the sandwich are: a 16ga steel ring (to hold the whole thing and be bolted to its mirror); 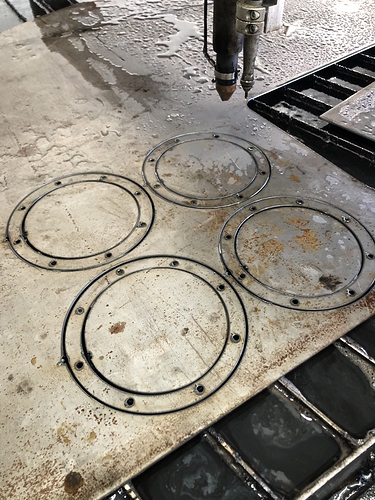 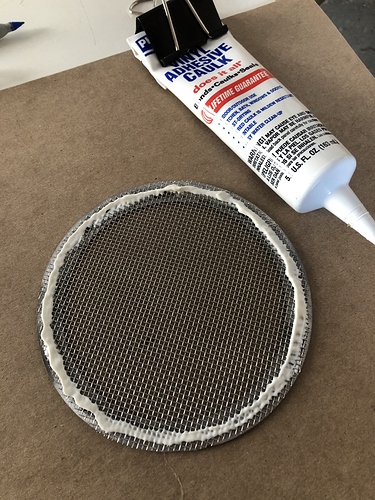 IMG-08213024×4032 2.77 MB
.
(note that the picture has caulk here, which failed, in the end i used rubber cement). After that I did use silicone caulk to function as a gasket between this grouping and its mirror. In between these layers the sorbent is placed. 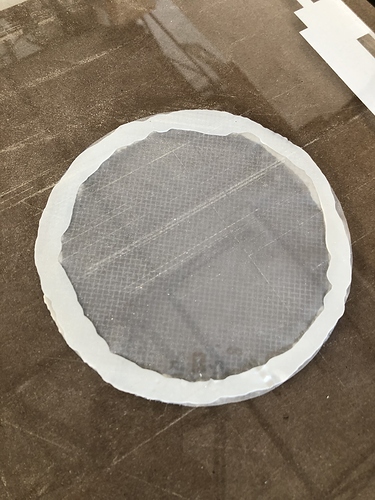 This whole thing it bolted together in eight spots, to try to keep the sorbent from escaping. These setups I’m calling ‘cartridges’.

The Prep Chamber is made of steel that I welded together. 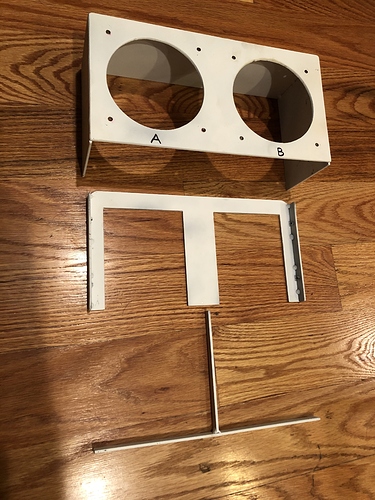 IMG-08843024×4032 2.86 MB
It is essentially a tissue box with two large circular holes at the top to permit direct airflow from two identical fans, placed immediately above the holes. Below is a plate who’s height is adjustable to accomodate different [future] cartridge depths. Once the cartidges are inserted a cap is inserted to try to seperate the two chambers. 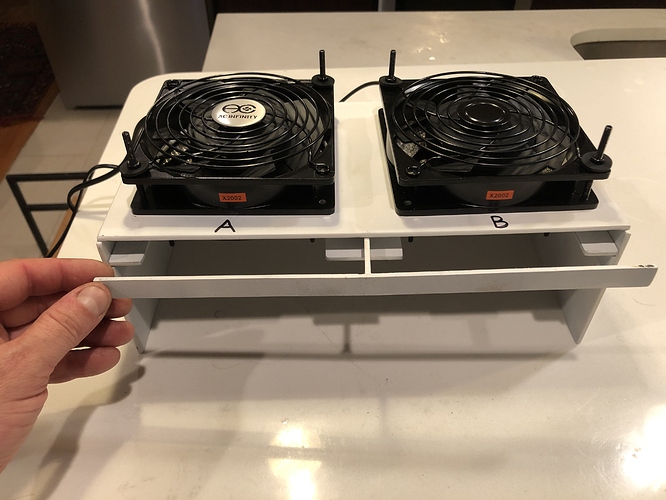 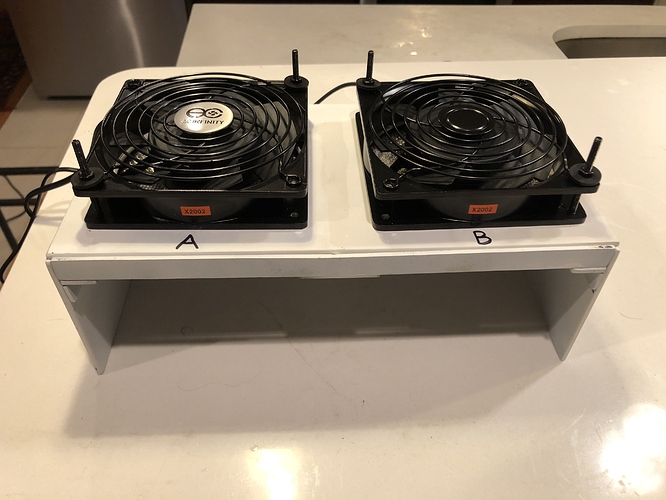 The fans should be adjustable in speed (another variable worth testing) but I bought the wrong ones.

The Testing Chamber part of this setup was made by purchasing a 6" dia acrylic cylinder and drilling a hole in the lower side for water transfer. Through this hole, a quick-connect bulkhead coupling was inserted and hot glued in place. A tube was connected between this coupling another, smaller, cylinder which had its own coupling arranged in the same manner. So then, if the small cylinder is filled with water, when it is raised it will transfer water to the larger chamber. Essentially a siphon. 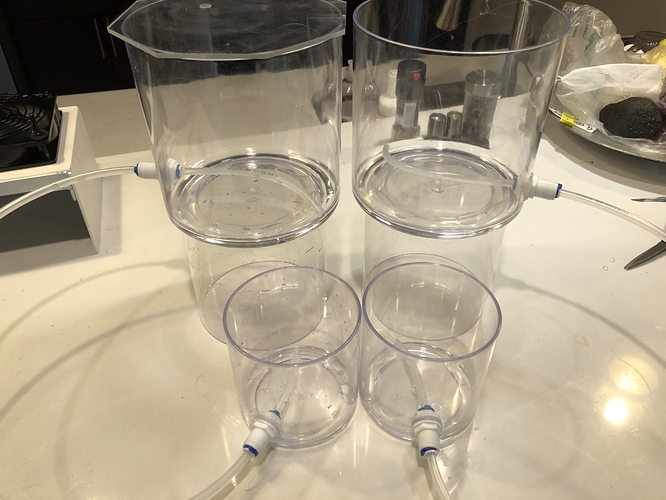 The lid of the Testing Chamber was a piece of acrylic with the SCD30 sensor hot glued on the underside and the arduino board glued to the top. A hole permitted the jumpers to traverse, and the hole was then hot glued to seal hermetically. 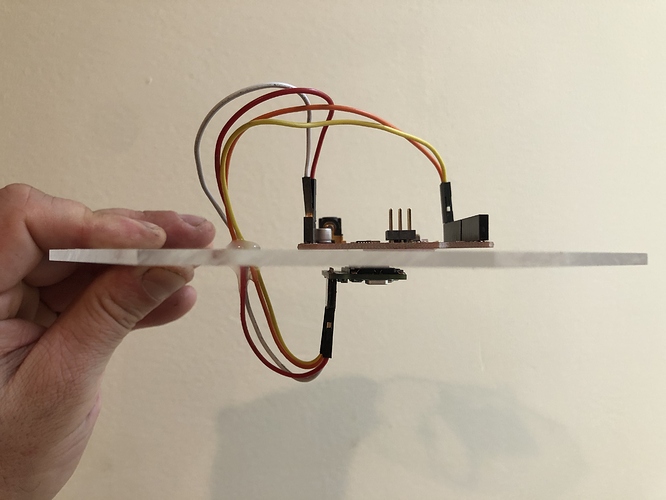 After being fanned, the cartridges were inserted into their large cylinders and the small cylinder with water was raised to engulf the cartridges. 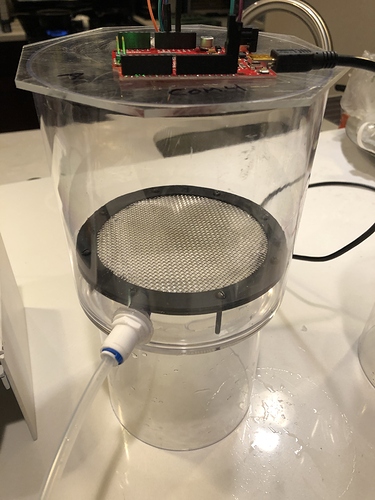 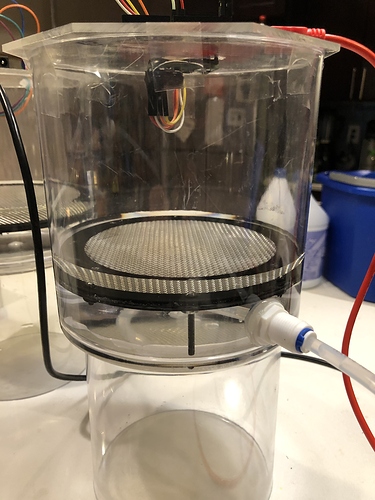 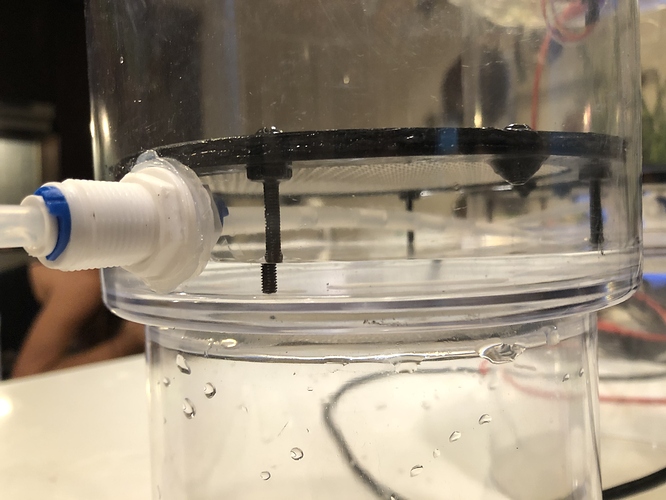 IMG-08784032×3024 1.45 MB
After ~15 minutes the small cylinder was then lowered to drain the water back out of the testing chamber. The arduino will have been taking readings this whole time. I will post results when this finishes. Thanks to Matt P for spending hours on zoom finding a way to get the arduino to export data to excel so we can post-process.

This first experiment, compared crushing sorbent versus not. Thus the control was the raw spherical sorbent straight from the manufacturer and the variable was the mortar-and-pestle-crushed sorbent. Both were prepared the same way regarding sorbent prep/anion exchange.

Great work, Peter! Looking forward to seeing the results, this will be a huge help in us understanding if crushing the sorbent significantly changes the effectiveness of the process.

Thanks for all you hard work!

Please post the excel results here when you get a chance.

I like the design of the cartridges. For Violet, it’d be great to find commercially available ones.

I’m curious what you saw in terms of air penetration through the meshes once the cartridges were populated with sorbent. I have the variable speed version of that exact fan, and I’m curious how far the air penetrates, given that in my experience, they tend to struggle with even looser meshes.

Also, a note for later: when testing, it’d be good to run multiple tests and swap the cartridges between the left and right sides. Most of these commercial fans have a a 5-15% fan speed variation from unit to unit even in the same model. In PC cooling this is adequate, but if we find that air flow rate is meaningful, that variation could potentially throw off results.

Excited to see the results! Once the extra sorbent gets in, we can start getting some real numbers!

@PeterLokken on yesterday’s DACC HACC (July 12) you reported back some results from your testing and shared this graph. 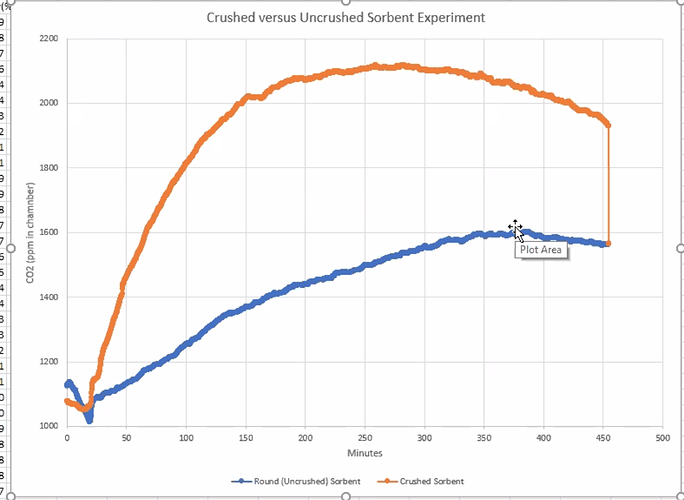 Orange line shows results of crushed sorbent; blue, uncrushed. Seems absolutely clear that the former, as we hypothesized based on Dr. Tao Wang’s research, performed far better. Any additional comments to make on what we now know and how this would inform next steps…?