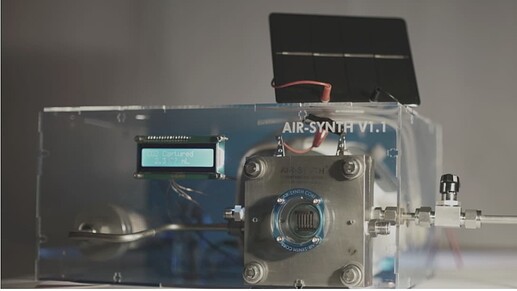 Air-Synth aims to democratize carbon removal, conversion and utilization through the open source development of a modular, low-cost electrocatalysis device that can be hacked and built by community members anywhere. As of December 2022, this is an early stage OpenAir mission seeking to enlist a diverse range of support and contribution from members to get it to launch.

In 2020 the founding team, made up of a diverse crew of product designers, engineers and hackers based in various parts of India, started working on the core concept: the electroreduction of CO2 into ethanol or other products on a desktop scale. They started with the basic idea of using copper-based catalyst in membrane electrode assembly (MEA) started with a zero-gap electrolyser (1 cm2). Following discussions and hands-on experiments in both Jaipur and the UK the team added the integration of micro direct air capture to the project scope, and also began exploring potential conversion of CO2 into useful chemicals.

In November 2020, project lead Anirudh Sharma made first contact with OpenAir, and discussions of an open source community-based mission, supported by the collective, began. COVID halted progress, but the concept continued to evolve through these conversations. Two years, and many tests and conversations later, Air-Synth was officially missionized in November 2022 with the immediate objective of validating prior experimental results through university-based partnerships.