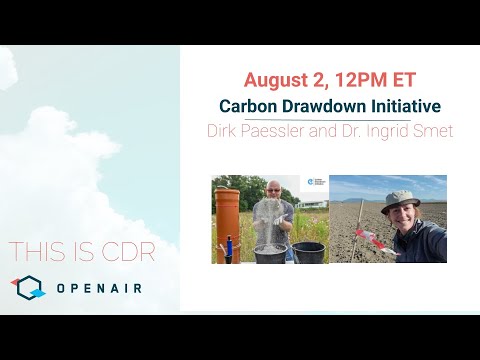 In this episode of This Is CDR, OpenAir is pleased to welcome Carbon Drawdown Initiative Founder and CEO Dirk Paessler, and geologist Ingrid Smet to tell us about Project Carbdown, a long-term field enhanced rock weathering (ERW) field trial, with a focus on the Project’s efforts to develop effective and practical measurement, reporting, and verification (MRV) of ERW as a method of durable carbon removal.

About Dirk: After founding and running Internet/software companies for 30 years, Dirk Paessler turned his attention to climate solutions in 2020. With Carbon Drawdown Initiative he works on speeding up negative emissions together with CTO Ralf Steffens. They currently focus on enhanced rock weathering on croplands as one of the few CDR solutions that can be scaled up to climate relevancy in the next 2-3 decades.

About Ingrid: Geologist Ingrid Smet obtained a PhD for her geochemical research into Greek volcanoes after which she explored active volcanoes worldwide as a tour organizer. Her research focus shifted to climate change mitigation when in late 2020 she was hired by FSM software company Fieldcode to set up their CO2 removal project. She carries out multiple enhanced weathering field trials in Greece, combining existing agriculture with locally found olivine-rich rocks, in collaboration with Project Carbdown.

About Carbon Drawdown: https://www.carbon-drawdown.de Carbon Drawdown Initiative GmbH was founded in January 2020 and is focused on promoting research, public discourse, and impact investment in the field of “negative emissions”. This involves the removal of carbon from the atmosphere with subsequent long-term storage of that carbon. This CO₂ removal is crucial to counteracting climate change by achieving “net zero”. This is especially important considering that certain emissions are difficult to avoid and will continue to occur in the future. The next step would then be to reverse the impact of historical emissions to bring current temperatures back down. If this does not happen, the excessively warm climate will continue for millennia. In addition to public discourse, political work, and early investment in start-ups with innovative concepts for CO₂ removal, the Carbon Drawdown Initiative also launched its own Enhanced Weathering project: “Project Carbdown” tries to measure the actual speed of basalt weathering with synchronized experiments in the lab, in pot experiments and in nature. It is a collaboration of more than 20 scientists and engineers across Europe. Partners are various international universities, including the Alfred Wegener Institute and the universities of Hamburg, Erlangen, Mainz, and Wageningen.