CDR may be expensive now, but can be made affordable with the right policies

Why the “it’s expensive” argument isn’t really an argument.

Many forms of CDR are expensive today, but it does not have to remain that way. If we invest now, we can significantly reduce the cost of even the most expensive solutions.

Like most new technologies, technology-based CDR is currently expensive. Direct air capture, for example, currently can cost more than $500 per ton of CO2 removed.

But these costs will decrease as these technologies are scaled up, mature, and are improved.

Renewable energy is a perfect recent example for how much cost can decrease given the right incentives. The cost of solar power decreased by 85% between 2010 and 2019. If we could achieve a similar rate of cost reduction, CDR would be below the $100-per-ton price point in ten years. 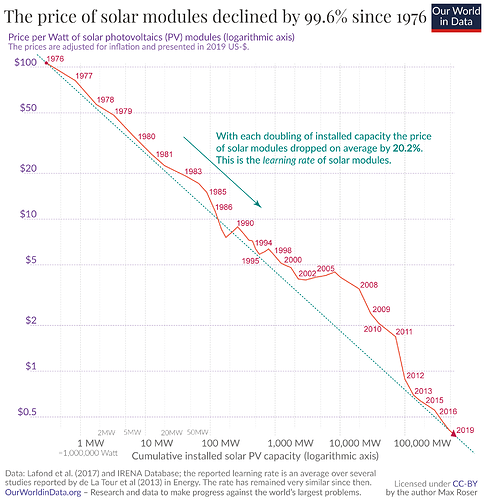 Improving new technology requires investment, and while it is crucial that we invest heavily in the protection of existing forests, reforestation, and afforestation where appropriate, it is equally important that we invest in technological approaches.

Most CDR methods are still fairly early in development, and at the moment, there aren’t enough buyers to kickstart advancement at the rate we need. This is a stage of development (sometimes referred to as the “Valley of Death”) that all new, ground-breaking innovations have to go through.

Government investments can create the market needed to get CDR technology through this early stage.

This is what OpenAir focuses on: writing and advocating for legislation that supports fledgling CDR until the private market can take over, as has happened with renewables.

Please also read “CDR is too expensive” under Common Arguments Against CDR for more information and examples.

A little more on the growth of renewables

Here is a short excerpt from a longer article providing a bit more background:

In 2010, solar and wind combined made up only 1.7% of global electricity generation. By last year, it had climbed to 8.7% — far higher than what had previously been predicted by mainstream energy models. For example, in 2012 the International Energy Agency expected that global solar energy generation would reach 550 terrawatt-hours in 2030, but that number was exceeded by 2018. These models often assume that the growth of solar and wind will be linear, but in reality the growth has been exponential.
Understanding the exponential growth of renewable energy in the past gives us reason to be more optimistic about how fast it can ramp up to meet climate goals in the future.

Here is another important sentence from this article: “As renewable energy technologies are modular and standardized, cost improvements or technological advances made in one place can be quickly copied elsewhere.”