CDR is too expensive

It is expensive, but a livable planet is worth the investment!

This criticism ignores tthe cost of doing nothing (spoiler alter: it’s huge!) and that technology tends to decrease in price over time. We’ll discuss an interesting example.

Yes, of course, CDR is expensive. How could it not be? Except for planting trees, all CDR methods are relatively new and not yet ready for use at scale. Today’s costs are just a starting point, and bringing down those costs is exactly why we need to invest now.

We’ll take a look at the first here as well, the second one get’s its own section.

This argument is often used by groups especially hostile to direct air capture (DAC). The cost for DAC currently runs around $500 per ton of CO2 removed. That’s too high, and individuals, as well as companies developing DAC systems, will be the first to admit this. The goal is to bring down the cost of CDR to $100 or less per ton. At that price, CO2 removal becomes an economically attractive option.

The major DAC companies all claim to have a clear path to reducing the cost per ton to that level. While it is always a good idea to critically question claims of businesses, the cost issue goes to the core of these companies’ business model and survival. It’s hard to imagine that these companies could continue to raise funds if the $100 goal was illusory.

The cost of doing nothing is way higher

This aspect is explored more in our chapter “CDR can create economic and ecological co-benefits” but to give you an idea, this is what a May 2022 Deloitte report says:

A new report from the Deloitte Center for Sustainable Progress (DCSP) released today during the World Economic Forum’s annual meeting indicates that—if left unchecked—climate change could cost the global economy US$178 trillion over the next 50 years, or a 7.6% cut to global gross domestic product (GDP) in the year 2070 alone. If global warming reaches around 3°C toward the century’s end, the toll on human lives could be significant—disproportionately impacting the most vulnerable and leading to loss of productivity and employment, food and water scarcity, worsening health and well-being, and ushering in an overall lower standard of living globally.

A little elementary school math then leads us to the following, admittedly vastly oversimplified back-of-the-virtual-envelop calculations:

If we assume the price of CDR is $500 per ton (a number everybody agrees is way too high, especially in a mixed portfolio of many different CDR approaches) then $178 trillion would buy us 356 billion tons of CO2 removal. That’s roughly 10 years of accumulated CO2 and together with decarbonization would get us quite a way to addressing the crisis.

Now, if we assume that the cost of carbon dioxide removal comes down to say $100 per ton, we are at 1.78 trillion tons of removal - and with that really close to removing the entire mess we made.

So, the question is: what should we spend our money on? Cleaning up after natural disasters, relocating 100s of millions of people worldwide, treating the increasing number of climate-related illnesses - or - building the equipment we need to “harvest” the CO2 we previously carelessly released and either bury it deep or use it as the building block for new products and materials?

If you look at it this way, the decision seems rather obvious.

Let’s stick with DAC for a minute. The challenge here is to decrease the cost to 20% of the current level (from $500 to $100) via innovations, process improvements, and economies of scale. It sounds daunting, but in the big scheme of things, this is actually a pretty modest reduction.

Renewable energy is a perfect, recent example for what is possible. The cost of solar/photovoltaic has come down by 82% between 2010 and 2019. Assuming a similar rate of cost reduction, CDR would be below the $100 per ton CO2 price point in 10 years.

To make the point even more clear, let’s look at another example: cell phones.

The first commercial cell phone was sold in 1984. It cost almost $4,000 (more than $10K in today’s dollars) and a ten-minute call set you back $12 in today’s money. All you could do with the phone was make calls, and it was a brick at 2.5 lbs. Clearly, there was no reason to develop cell phones further. They were too expensive to buy and use and too heavy to carry around.

Today you can buy a smartphone for less than $400 that comes with a computer that is a thousand times more powerful than the supercomputers of the '80s and fits in a shirt pocket. Technology needs time and investment to get better and cheaper. 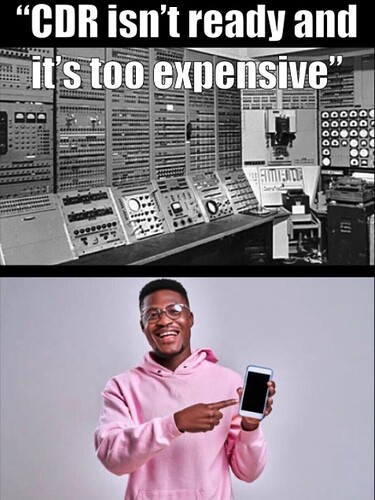 The honest answer to this question is: we really don’t know how much it costs to plant trees (that actually survive). The numbers you find in the literature are all over the place; you’ll find values ranging from $5 to $4,341 in the US and from $0.2 to $1,654 internationally.

Why are these numbers so inconsistent? Firstly, the definition of “planting a tree” matters a lot. Does this mean you put a seedling into the ground and then walk away hoping it will somehow grow, or does it mean you will care for it for the next three or so years until it is strong enough to survive?

If you care for it, do you use effective but toxic herbicides like glyphosate, or do you weed by hand (better for the ecosystem, but approximately three times more expensive)?

Do you restore an intact forest and ecosystem, or do you plant monocultures of fast-growing trees for timber and pulp production which are easier and cheaper to plant but only have a fraction of the CO2 removal capacity of intact ecosystems and will be cut down in a mere few decades?

The answers to these questions critically impact the cost - and success - of large-scale tree planting as a way to remove CO2.

Despite these uncertainties, planting trees will be an important part of any carbon removal effort, and OpenAir supports reforestation and afforestation programs. But it’s important to be honest about the limitations of purely nature-based solutions so that we can also start scaling other solutions that will help us reach our removal goals.

For more about the limitations of reforestation and afforestation, also see our chapter "Planting trees - necessary but not enough"​

How much money are we talking?

Opponents circulate huge numbers, hundreds of billions of or even trillions of dollars that it would cost to remove gigatons of CO2 from the air. That is a scare tactic. True, if we were to use today’s most expensive CDR method, DAC, to pull out gigatons of CO2 we would need unreal amounts of money, resources and land.

But nobody proposes that. What we advocate for is to take a bit of money and invest it now with the goal to make these solutions cheaper. By a lot.

We used the cell phone example before, let’s go back to it for a second. There were over 5 billion cell phones in use worldwide in 2020. At the cost of the first cell phone ($10K in today’s money) the total cost of these cell phones would be $50 trillion. Clearly, a ridiculous amount but that number didn’t kill cell phone development. The clear expectation was that prices would come down, by a lot, and performance would increase.

And that’s exactly what happened.

What OpenAir and other CDR proponents advocate, is to use a small fraction of the money that goes towards a sustainable transformation and invest it now. The critical point here is that the sooner we invest the sooner those approaches will be able to scale and deliver significant CDR.

Some data to support that technology, indeed, gets cheaper

source: Solar power got cheap. So why aren’t we using it more? | Popular Science