"CDR is a distraction from real solutions." or "All we need to do is decarbonize."

Critics sometimes describe CDR as a “false solution” that distracts from the real solution, namely decarbonization. This is a false dichotomy and a misleading way to frame the issue.

Experts broadly agree that we need both rapid decarbonization and removal of CO2 from the atmosphere to avoid a climate catastrophe. The IPCC Report makes clear that even if we could fully decarbonize tomorrow (which we can’t), we’d still have to clean up the vast supply of CO2 emitted into the atmosphere since the beginning of the Industrial Revolution. We need to move CDR forward now to meet the scale of the problems ahead. 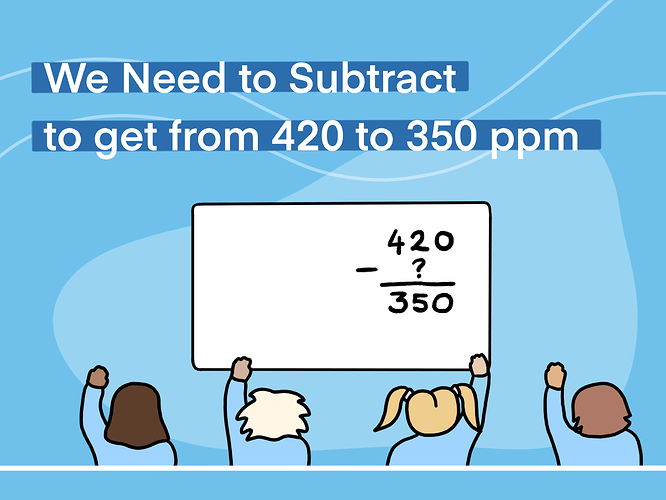 After releasing hundreds of gigatons (billions of tons) of CO2 into the atmosphere since the start of the industrial revolution, we have managed to increase the concentration of CO2 in the atmosphere to levels not seen in three to five million years.

NASA provides a nice short overview of how things were back then, before humans roamed the earth.

We have to think about this CO2 as a form of waste or trash. It doesn’t bother our senses because it is a colorless, odorless gas that we don’t see or smell like we see and smell a landfill. But it is still there and harms our planet by contributing to global warming.

Just like regular waste, not creating more is very important but we also need to properly dispose of the waste we already created.

Decarbonization of our lives - that is not continuing to burn fossil fuels for our energy needs - is what we need to do to not create additional waste. Carbon dioxide removal is the equivalent of taking care of the old trash that has been sitting around for decades.

These two approaches are not in competition, they are synergistic. Both are needed to clean up our atmosphere.

Claiming that CDR is a false solution completely ignores the fact that no amount of decarbonization will make a dent into the existing “CO2 trash”, that is, it will not help reduce the CO2 concentration in the air but only slow down (and eventually, hopefully, halt) how much new CO2 we add.

CO2 is not just going away

One argument that comes up is that we do not need to remove CO2 because natural processes will take care of the removal.

While this is in principle true, the timeline for the natural removal of CO2 is very long, too long to be relevant for the current, acute climate crisis.

So, unfortunately, relying on the slow, process of CO2 degrading naturally is not a feasible option. 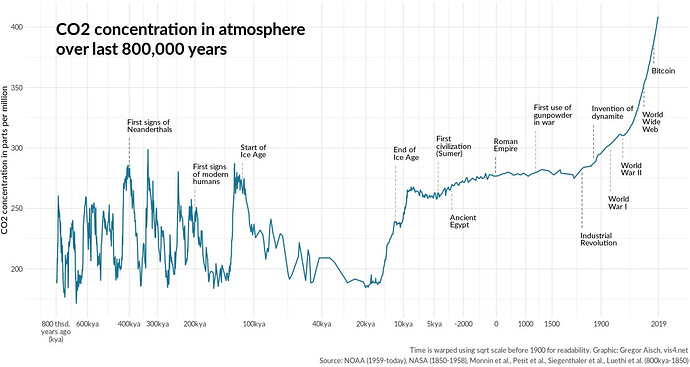 Two things are important to notice:

One, the time scale on the x-axis is warped. Before 1900 a square root scale is used to compress the timeline for better readability. If the time after 1900 was on the same scale that CO2 peak would look pretty much like a straight line up.

Two, the timeline also contains some important milestones of human development. The first humans made an appearance about 200,000 years ago. Throughout the entire human development, CO2 concentrations have been lower than they are now. The human race thrived in those climates (even if it was a bit cold at times).

Climate change deniers often argue that CO2 concentrations used to be much higher at various points during earth’s history and while that is correct, it is hardly relevant - at least not to us humans and the fauna and flora we have now. Just because dinosaurs and microbes enjoyed very high CO2 concentrations and resulting high temperatures 200 and 500 million years ago, doesn’t mean it is suitable for us.

All pathways that limit global warming to 1.5°C with limited or no overshoot project the use of carbon dioxide removal (CDR) on the order of 100–1000 Gt CO2 over the 21st century.” - Special Report: Global Temperature Change of 1.5 C - A Summary for Policymakers, C.3. (2018)

"Unless affordable and environmentally and socially acceptable CDR becomes feasible and available at scale well before 2050, 1.5°C-consistent pathways will be difficult to realize….” - Special Report: Global Temperature Change of 1.5 C - Chap. 4 Strengthening and Implementing the Global Response (2018)

“Compared to previous Assessment Reports, it is clear that the ambitious temperature targets agreed upon in Paris in 2015 will require at least some carbon dioxide removal (CDR), i.e. all 1.5°C pathways feature annual removals at Gigaton level.” - IPCC, AR 6: Impact, Adaptation & Vulnerability, p. 3252 (2022)

“If the goals for climate and economic growth are to be achieved, negative emissions technologies will likely need to play a large role in mitigating climate change by removing ~10 Gt/y CO2 globally by midcentury and ~20 Gt/y CO2 globally by the century’s end.” - National Academy of Sciences - Negative Emissions Technologies and Reliable Sequestration: A Research Agenda: (2019)

How can you claim that getting from 420 ppm to 350 ppm CO2 does not require subtracting CO2 via CDR?