Methane CH4 is a very powerful greenhouse gas–in fact, many times more powerful than CO2 by some measures. And yes, we are worried about methane as well.

Methane is a very powerful greenhouse gas and the second most abundant one after CO2. It is about 25-30 times as potent as carbon dioxide at trapping heat in the atmosphere. (There are different numbers about CH4’s relative potency compared to CO2 out there. We’ll explain further down why that is.) It’s more powerful but it is also less stable, which means it doesn’t stay in the atmosphere for as long as CO2.

Where does methane come from?

There are many sources of methane, both natural and caused by humans. Humans cause roughly two-thirds of methane emissions. The five largest ones are energy production, agriculture (primarily from livestock), waste management (landfills), oil and natural gas systems, and wastewater - in that order. 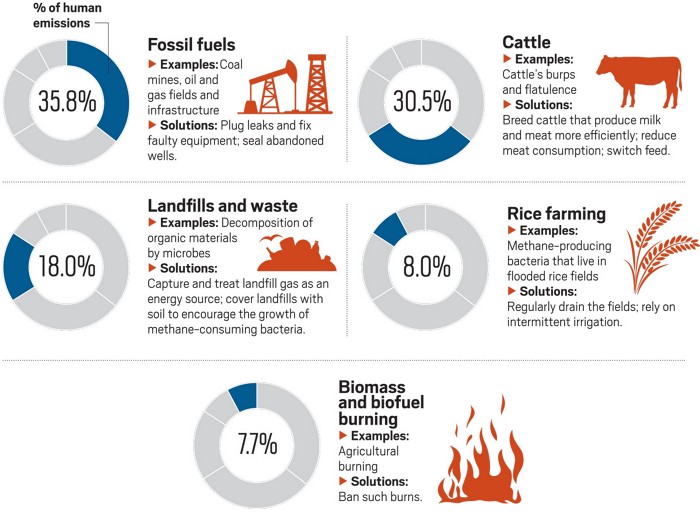 One regularly encounters two numbers when comparing the greenhouse gas “power” of carbon dioxide and methane: 30 times or 80 times. Both are correct. The difference lies in the time frame one considers.

Methane is unstable compared to the infamously stable CO2. While CO2 lingers for centuries, maybe more, in the atmosphere, upwards of 80% of the CH4 is gone in 12 years, according to this article by UC Davis researchers. So calculating how much more powerful CH4 is as a greenhouse gas depends on your time frame. If you look at it in the long term, say a century, almost all of the CH4 is gone and its Global Warming Potential (GWP) is somewhere around 30. (CO2 is the base unit for measuring GWP, with a value of 1. You can read about the measurement system here.)

However, if you look at the short-term (up to 20 years), that number is higher, around 80 GWP.

CH4 is fast out the gate, so to speak, but CO2 can catch up simply because it is around for much much longer.

Methane is a real thread and the best approach to take is to dramatically reduce the production of it. “De-methanify” or economy, so to speak. The reason why the focus needs to be on methane avoidance is that methane capture is that it is even more dilute in the atmosphere than CO2 and therefore even more difficult and expensive to remove actively.