We need to clean up the mess we made

We have released hundreds of gigatons of CO2. Most of it is still in the atmosphere, and it’s not going anywhere any time soon.

The focus on decarbonization, while extremely important, overlooks the elephant in the room: we have already polluted the atmosphere with more than a thousand gigatons (billions of tons) of CO2. We can’t just ignore that reality and pretend that not adding more to the mess we’ve made somehow solves the problem. 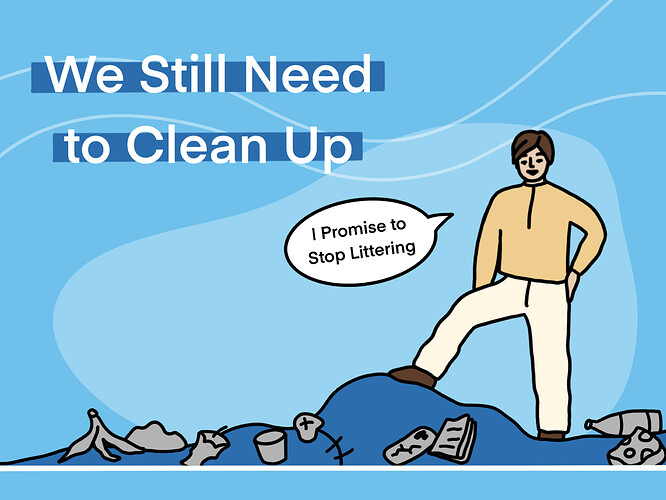 How much CO2 have we released so far?

Since the beginning of the industrial revolution, humans have released ca 2000 gigatons (billions of tons, so in total we are talking 2 trillion tons - a number so large it is pretty much incomprehensible) of carbon dioxide into the air. This carbon, which was previously sequestered away in the form of oil, gas, or coal, has accumulated in the atmosphere in form of CO2. We need to start removing it.

Currently, the atmosphere contains almost 420 parts per million of CO2. The only way to get to a more sustainable level of say 350 ppm (and still less would be better) is to subtract CO2. That’s what CDR does. There is simply no other way.

We are way past the discussion of “Do we need CDR?” and onto “How do we make it happen quickly enough on a large enough scale?”

What happens to the CO2 we’ve released?

Approximately half of the CO2 that human activities have released is taken up by so-called carbon sinks, specifically plants through photosynthesis, soil, and the oceans. The rest remains in the atmosphere and contributes to global warming.

We’ll talk about carbon sinks in a later chapter. For now, let’s look at the question of what happens to the CO2 that is not taken up by an ocean or geological carbon sink but remains in the atmosphere.

Here is what NASA (an organization that knows a thing or two about the atmosphere) says about atmospheric CO2:

Once it’s added to the atmosphere, it hangs around, for a long time: between 300 to 1,000 years . Thus, as humans change the atmosphere by emitting carbon dioxide, those changes will endure on the timescale of many human lives.

Therefore: about half of the CO2 we have emitted, or roughly a trillion tons, is in the atmosphere and is going to be there for a very long time.

How much CO2 is too much? 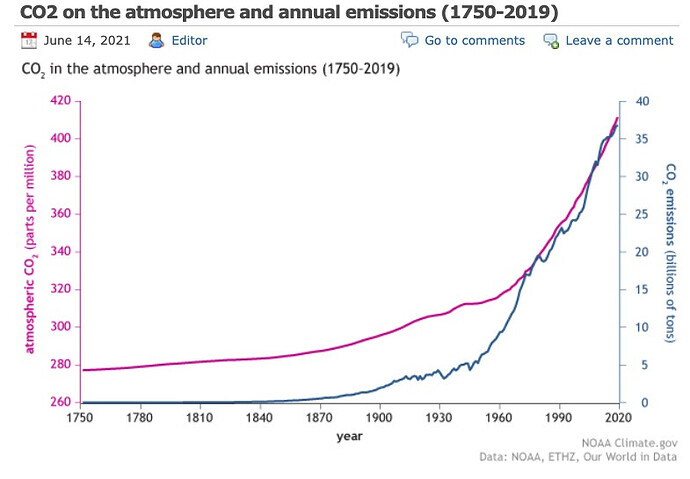 image785×546 59.1 KB
Despite investments into renewable sources of energy, we continue to use fossil fuels at the gigaton-per-year scale, quickly increasing the concentration. At this point, even if we stop fossil fuel emissions tomorrow (which we won’t), we’ve got big problems. The CO2 we’ve already emitted is enough to cause dangerous climate conditions for centuries to come. To reduce the amount of CO2, we therefore need to do two things:

Rapid decarbonization is critical. We simply cannot continue to release CO2 at anywhere near the rate we have been. Everybody in the environmental protection community agrees on this.

But decarbonization still leaves us with the existing excess (and the fact that, realistically, we won’t be able to end all fossil fuel use overnight). The only way to get rid of the CO2 we’ve already emitted is carbon dioxide removal.

The 2018 IPCC report states the following:

It is clear that the ambitious temperature targets agreed upon in Paris in 2015 will require at least some carbon dioxide removal (CDR), i.e. all 1.5°C pathways feature annual removals at Gigaton level*** (Rogelj et al., 2018) . " [link]

Sometimes it helps to provide an analogy that people relate to. Here’s a suggestion:

Think of CO2 emissions as an oil spill in the atmosphere. Because CO2 is colorless and odorless we don’t notice how much we have already polluted our air, but it is still there.

CO2, just like oil–and unlike apple cores or banana peels–doesn’t quickly disappear. It hangs around for hundreds of years, if not longer. So what can we do now that we have leaky “CO2 ships”? (And, unlike real oil tankers, all CO2 ships are leaky!)

First and most importantly, we need to stop sending more “ships” that leak more CO2 on the journey. Concretely, that means switching to all renewable sources of energy that don’t produce CO2 (solar, wind, geothermal, etc.). This way we add less and less and eventually no more CO2 to the already huge spill. The faster we can do this, the better.

There is a second part though: we need to clean up. Just as oil harms and kills animals and ruins beaches and water, excess CO2 causes harm by heating up the atmosphere. We cannot and should not remove all of the CO2, just the excess–which is still a huge amount!

Just like in an oil spill, one method of cleaning up won’t do. We need many different ways of cleaning. Some of the work nature can do for us. For example, if we plant more trees, they will remove CO2 from the air. But we need to help nature and come up with other ways to remove the “oil.” Many different approaches are already in development, but none is able yet to remove a large amount of CO2.

Maybe a somewhat simpler analogy. If you knock over your milk carton you know you have to do two things: put it upright so it won’t continue to spill and with the other hand quickly grab a sponge or rag to wipe the spill before it makes its way to the floor and soaks the mail and sweater you also tossed on the counter.

Does nature heal itself?

In the long run, maybe. In the time frames that are relevant to humans and many other species - many threatened by extinction - no. We have overwhelmed nature with our CO2 waste to a point where it can no longer simply recover or heal itself in a short timeframe.

This article from Chemical & Engineering News explains very well what we have to do (highlights added):

The strategies for getting [to net zero emissions by 2050] fall into two buckets: emission reduction and carbon removal. Emission reduction is anything that results in less CO2 being released, including point-source carbon capture, improved energy efficiency, electrification, renewable energy, regenerative agriculture and forest management, and reengineering of industrial processes. Carbon removal is anything that pulls CO2 out of the air, including nature-based methods such as planting trees and technologies such as DAC.

Though the two approaches sometimes compete for investment and for buyers of the emissions-offset credits they create, many experts say both will be needed. Marcius Extavour, vice president for energy and climate at the XPrize Foundation, says the IPCC report and its follow-ups lay out the need clearly. “If we want to avoid warming beyond 1.5°C, every scenario is going to require some kind of carbon removal, in addition to reducing emissions immediately and as fast as possible.”

Sources addressing the question of how much carbon dioxide we have released so far:

According to the Global Carbon Project, since the start of the Industrial Revolution, more than 2,000 billion metric tons of carbon dioxide have been added to the atmosphere by human activities.

If you want another source, here we go:

Current data (from direct measurements of the atmosphere to historical records of industry) tells us that between 1751 and 1987 fossil fuels put about 737 billion tons of CO2 into the atmosphere. Between just 1987 and 2014 it was about the same mass: 743 billion tons. Total CO2 from industrialized humans in the past 263 years: 1,480 billion tons.
Source: The Crazy Scale of Human Carbon Emission - Scientific American Blog Network
(Note that this only counts up to 2014, so we need to add a lot more CO2 to get to current levels.)