The role of natural carbon sinks

Nature has done us a huge favor so far and absorbed about half of our CO2 waste. Unfortunately, it’s not enough and the negative side effects are showing

Plants, soil and the oceans have taken up a lot of the extra CO2 we have so far released. Deforestation, draining of peatlands and non-sustainable farming practices limit how much CO2 plants and soil can take up and store. Too much CO2 in the oceans already causes acidification which disrupts ecosystems, e.g. the coral reefs.

These natural carbon sinks have helped us a great deal so far and have limited global warming but we cannot continue to rely on them to come to our rescue.

What are carbon sinks

Carbon is a critical component of life, it is part of the proteins, fats and sugars that make up all living beings. It’s part of our DNA, the air we breathe (CO2), the cement we build our houses with and many other things. Carbon flows continuously between these places in a process called carbon cycle. 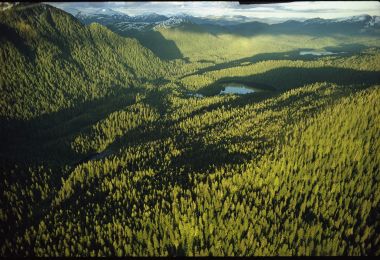 Where did all the CO2 go?

Of the billions of tons of CO2 that humans have emitted by burning fossil fuels about half has been taken up by carbon sinks. The rest is - and will remain for a long time - in the atmosphere.

So far nature has helped us out but the main carbon sinks - forests, soil and the oceans - are struggling which means even more of the CO2 we emit will remain in the atmosphere.

Here is a short look at the major carbon sinks.

As trees grow they use carbon to build up biomass and act as carbon sinks. The world’s forests. capture about 15 gigatons (15 billion tons) of CO2 every year but about half of that leaks back into the air mainly through deforestation and wildfires. Converting forests into agricultural land reduces the CO2 uptake. In Southeast Asia, the tropical forests are already a carbon source rather than a sink, due to deforestation - the Amazon currently is about neutral but on its way to become a carbon source if the deforestation and conversion into agricultural land continues.

Reforestation or better yet, letting forests grow back naturally, would help to turn them into carbon sinks again. However, this would mean the loss of land for agriculture. Balancing these competing interests is incredibly difficult.

Soils are the unsung heroes of carbon removal. They hold almost twice as much CO2 as plants and the atmosphere combined. Carbon get’s into the soil via plants, as they die and turn into carbon-rich humus (no, not “hummus” as in “spread made from ground chickpeas and other stuff” but “humus” as in “the organic component of soil, formed by the decomposition of leaves and other plant material by soil microorganisms”). However, carbon uptake by the soil is a fairly slow process.

Disturbing the soil structure, e.g. by farming, releases a lot of the stored carbon into the atmosphere contributing to global warming.

If soils are the unsung heroes, peatlands and marches are the superheroes. The world’s peatlands account for about a third of the total CO2 absorbed by soil, although they make up just 3% of the world’s land area.
The reason is that plant debris in peatlands does not decompose due to lack of oxygen in these environments but instead turns into carbon-storing peat.

Draining peatlands and marshes introduces oxygen, which leads to decomposition and CO2 release. Draining of peatlands is exactly what has been happening and is continuing to happen all over the world.

Oceans sequester a large portion of the CO2 humans release. The oceans have absorbed between a third and a half of the CO2 humans have released into the atmosphere since about 1850. This has slowed the rate of climate change (link)

Here is how it works: marine plants, e.g. kelp, microorganisms, plankton and other photosynthetic bacteria are responsible for capturing CO2 and turning it into biomass with the help of photosynthesis. As these organisms die, they either sink down to the ocean floor directly or are eaten by sea animals which eventually die and also end up on the ocean floor. Down at the bottom of the ocean, the carbon is efficiently and effectively socked away.

Another way CO2 is bound by the oceans, specifically the surface regions, is by being absorbed and then reacting with water molecules to form carbonic acid. Carbonic acid is not the end product, it breaks down into bicarbonate and hydrogen ions (H+). The presence of large amounts of H+ ions makes the water more acidic, that is, they cause the acidification of the oceans.

(Side note for the non-chemistry inclined readers: this is how acids are defined: “An acidic solution has a high concentration of hydrogen ions , greater than that of pure water.” So any chemical reaction that increases the number of H+ ions above that of water causes acidification.)

And just because we can’t entirely do without chemical formulas, here is how this reaction works:

While the capacity of the ocean carbon sink is huge, the negative side effects of adding too much CO2 to the oceans are already obvious. One example is dying coral reefs. To understand this better a little bit more chemistry is required.

The more acidic seawater becomes, the less calcium carbonate it can hold. Many marine species, including coral, need calcium carbonate to build their protective shells and exoskeletons. Without it, shells grow slowly and become weak. Coral reefs with breakable, slow-growing corals erode more quickly than they grow. In other words: they die. (source)

Here is an overview image of the main carbon sinks and sources.