The Heinrich Böll Foundation maintains close ties to the German Green Part (Alliance 90/The Greens) and as a think tank for green visions and projects, we are part of an international network encompassing partner projects in approximately 60 countries.
Heinrich Böll’s encouragement of civil society interference in politics is a model for the work of the foundation. Its primary task is political education in Germany and abroad to promote the democratic will, the socio-political commitment and international understanding. It is guided by the basic political values of ecology, democracy, solidarity, and nonviolence. The foundation is particularly interested in the realization of a democratic immigration society as well as gender democracy as a relationship of the sexes that is free of dependence and domination."

This summary is derived from the following report that was co-authored with CIEL: “IPCC Unsummarized Unmasking Clear Warnings on Overshoot, Techno-fixes, and the Urgency of Climate Justice” April 21, 2022.

HBF is a staunch CDR opponent whose exclusive focus for mitigation of global warming is ending the production and use of fossil fuels. They consider CDR “unproven and risky technologies”.

As opponents often do, they conflate CCS and CDR and accuse the IPCC of pandering to governments and fossil fuel industry interests. They cherrypick the risk assessment sections for alarming sounding bites and play up comments about CDR being unproven at scale (which is mostly true, as it is new and hence needs to first be deployed to be proven at scale).

You will find every permutation of every anti-CDR argument we addressed in our chapter “Misinformation about CDR” in the report mentioned above complete with biased language, e.g. calling all CDR “techno-fix”.

The interesting thing is, that when it comes to the underlying facts, there is no disagreement on many of them. We all agree that (all subheads from the report):

Where the consensus breaks down is that HBF and CIEL claim that the "limiting warming to 1.5°C without overshoot is possible “with immediate and rapid fossil fuel phaseout and that CCS and CDR approaches are only necessary if fossil fuel phase-out is deliberately delayed to cater to the fossil fuel industry” as well as those overshoot scenarios are considered acceptable because the possibility of CDR exists.

The question is all comes down to is: can we limit warming to 1.5°C without overshoot with decarbonization only?

Here is what the IPCC Report says: 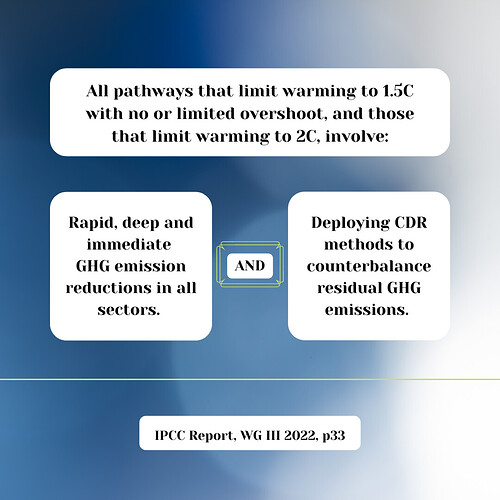 Like other opponents, HBF assumes that any approach that includes the removal of CO2 from the air or from polluting but hard-to-abate sources is exclusively an excuse to continue to use fossil fuels.