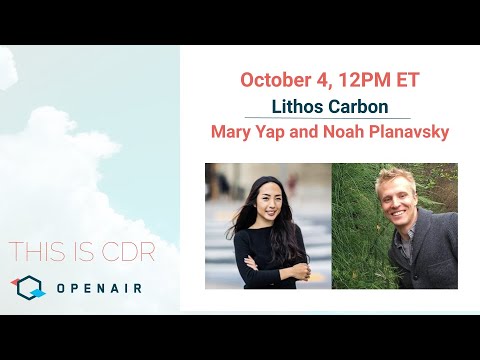 For our 50th episode This Is CDR welcomes Lithos Carbon Co-Founders Mary Yap and Dr. Noah Planavsky to tell us how the company accelerates mineral weathering by spreading basalt on croplands, and uses novel soil models and machine learning to maximize CO₂ removal while boosting crop growth.

About our Guests - https://www.lithoscarbon.com
Mary Yap is co-founder and CEO at Lithos, a leading company transforming farmland into carbon capture centers. The team’s mission is to accelerate mineral weathering — an integral process in the Earth’s carbon cycle that naturally captures CO₂ at the gigaton scale. Lithos’s technology incorporates cutting-edge research from Yale and Georgia Tech and uses novel soil models and machine learning to maximize permanent CO₂ removal while boosting crop growth. Lithos is one of five startups from around the globe selected as inaugural suppliers for the Frontier climate fund’s first round of permanent carbon credit purchases, and is backed by investors including Union Square Ventures, Greylock Partners, and Bain Capital Ventures. Mary previously studied plant biology at The University of Chicago and geology and planetary sciences at Yale University, where she conducted award-winning scientific and urban research on the climate crisis. Mary previously spent 6+ years scaling early-stage startups to millions of users across 55 countries, and her family are generational smallholder vegetable farmers in Taiwan.
Noah Planavsky is a co-founder at Lithos and an Associate Professor with the Department of Earth and Planetary Sciences at Yale University. He is the Director of the Yale Metal Geochemistry Center and is on the steering committee for the Yale Center for Natural Carbon Capture. As an isotope geochemist, he leverages field studies, analytical chemistry, novel isotope systems, and geochemical modeling to uncover the story of environmental change in Earth’s past, present, and future. He has extensively published on atmospheric carbon dioxide concentrations and currently focuses on deploying carbon capture through enhanced rock weathering in marine and terrestrial systems and tracking how primary productivity has changed through time. Noah has published over 150 papers in high-impact journals, has 15,000+ citations, and is a recipient of the Clarke Medal and the Packard Fellowship, among other awards. Along with their co-founder Chris Reinhard, Noah co-invented Lithos’ novel isotope dilution technology to enable cost-effective and precise empirical verification of carbon dioxide removal in soil. Originally from Wisconsin, Noah still co-runs the family farm in the Midwest today.