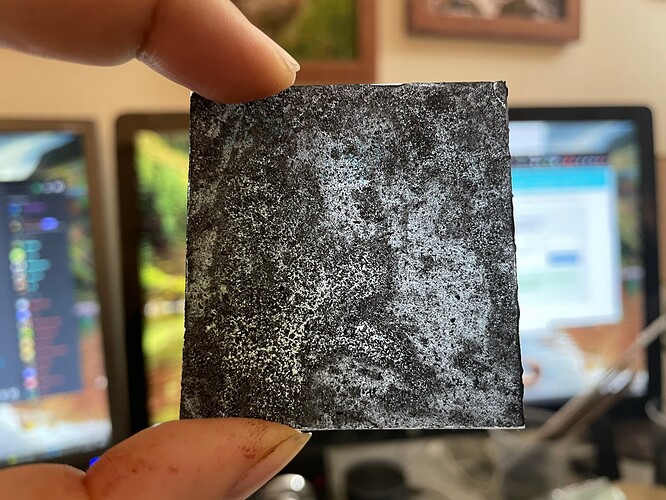 After having written my Moisture Swing Assessment, I had the idea that it was certainly possible to make my own sorbent material with moisture swing activity. Furthermore, I thought it would be possible to do this in an environmentally-friendly manner, using carbon-storing materials for the sorbent backbone. I also wanted the active ingredient itself to be non-toxic and thus safe to handle, including any reagents needed to prepare it for use.

For this initial testing, I used a fine biochar (< 50 mesh/397 micron) mixed with the active ingredient (a quaternary ammonium cation or amine) in a concentrated solution under 40 C heat for 2 hours and then at room temperature until dry enough to crumble the biochar (min. 12 hours). The loaded biochar was then applied to a 5 cm x 5 cm double-sided adhesive sheet that was in turn adhered to a PET plastic backing. This applied more biochar than would actually stick; after the first wash much of it ran off into the water, causing it to become more alkaline than later washes. This is shown in the following graph. 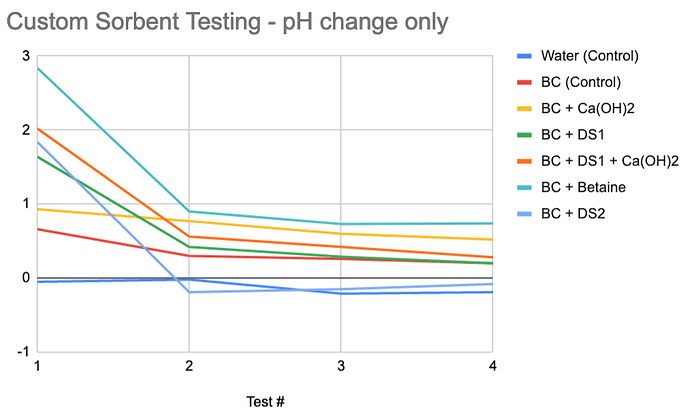 The above graph shows the pH change of 10 ml distilled water before and after each sheet was inserted into its own plastic bag along with the distilled water. Each bag was quickly sealed after the sheet was added to the water so that if there was captured CO2, the water would carbonate and form carbonic acid, effectively lowering the pH. Biochar itself typically raises the pH of water because it is alkaline, so if there is a negative pH change this was treated as a possible indicator of CO2 release.

Not all the ingredients are specified; I used DS1, DS2, etc. to identify those with active ingredients that are currently under DeepScience investigation. It turned out that DS2 was the only sheet that showed the necessary activity to warrant further investigation with a CO2 sensor. 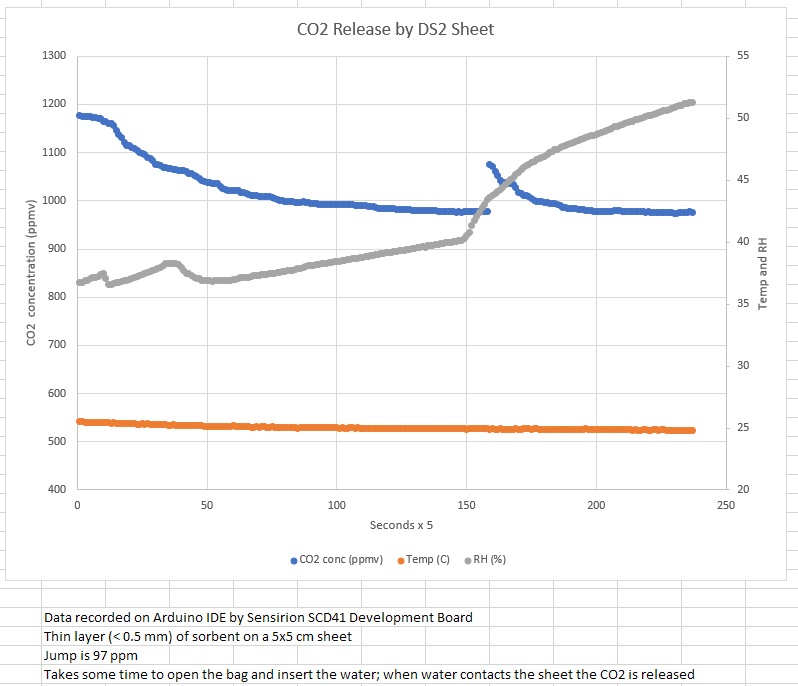 I used a Sensirion SCD41 Development Board and the Arduino IDE to capture data from the sheet enclosed in a sealable but not entirely airtight plastic bag. Over time the CO2 in the bag was decreasing, but at the time that the sheet was being wet with distilled water inside the bag, the humidity increased. I then created a clear air path from the wet sheet to the CO2 sensor and this is when the jump in the graph occurred. This jump is equal to 97 ppm. This CO2 release is short and fast (5 seconds) which makes sense given that the amount of loaded biochar is really small (~0.06 g at the most; it is an exceedingly thin layer).

Here’s a picture of the experimental setup with the sheet and the bag. The sheet is to the lower left and needs to be lifted inside the bag to create a clear air path to the sensor at the top. The sensor is to the left of the red LED light in the picture. 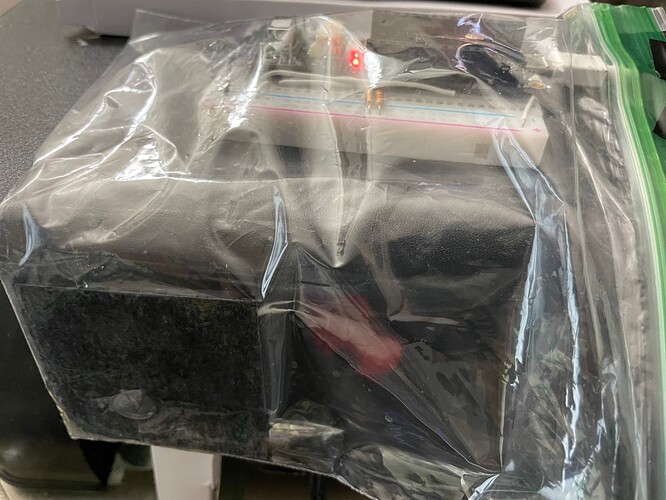 I also tested the betaine sheet with the CO2 sensor just in case, since it would have been great to have a food-grade sorbent. I unfortunately saw no CO2 release.

I then tested the DS2 sheet again with the CO2 sensor to confirm CO2 release; this occurred to a lesser extent than before, possibly due to the length of time I had the bag open, but the sheet was clearly still active.

Unfortunately after soaking in 1 M sodium carbonate for 15 minutes and then rinsing and drying with distilled water, I did not see any CO2 release from either the DS2 sheet or the betaine sheet.

Next steps: Get an airtight container of known volume and make up a new DS2 sheet for testing. 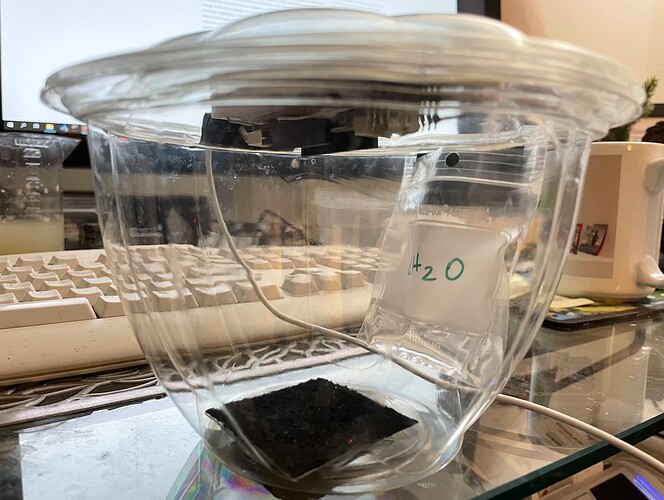 This is pretty air tight and the volume is right around 1.4 L. I used a salad container from Mad Greens, stuck the sensor breadboard to the top, and cut a small hole in the side of the lid for the USB cable going to the computer that was later sealed with electrical tape. To the side I attached a plastic bag with some distilled water that had a magnet-attracted strip of metal taped to the inside of the bag. The idea was that when I sealed the container and released the magnet from the outside, the bag would be released and the water would be able to be released to wet the sheet without soaking it.

I made more sheets today to see if I could improve my CO2 takeup/release graphs. Will update us soon on what I find. I’m currently testing out a gel formulation to remove the need for a plastic backing to the sheet. The gel does make the CO2 release slower, but it still gets released to indicate that it was there to begin with. Below is a thin sheet of the resulting material, poured into a circular plastic lid and released. 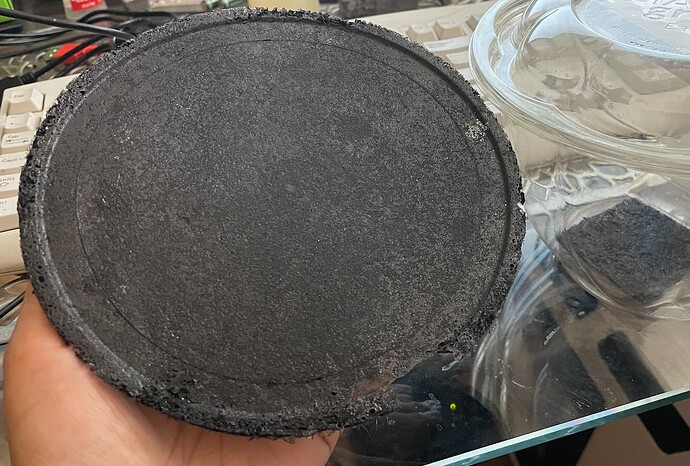 And here is the edge (the inner portion is actually half as thin as the circumference): 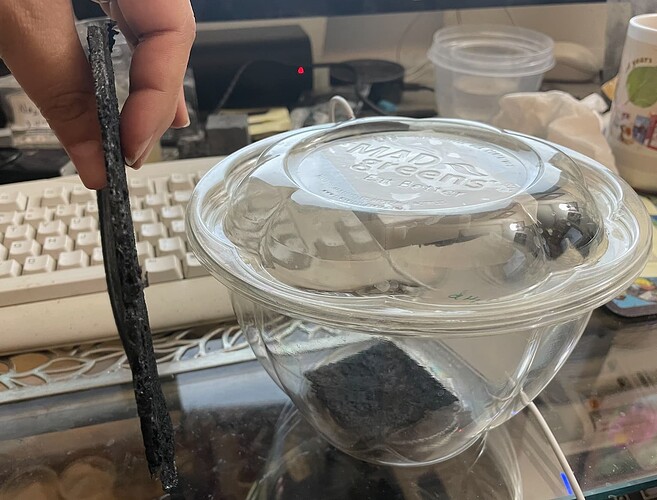