CDR is untested and still theoretical

CO2 removal has been around for some time. Submarines and the Space Station require CO2 removal to keep the air breathable. What’s new is the scale and speed with which we need to deploy those solutions.

CDR is not one technology but many different approaches used to remove CO2 from the air (not from smokestacks–that’s CCS!). Planting trees is an important form of CDR and is hardly untested. We need to differentiate between demonstrated vs commercial. Many CDR methods have been demonstrated on a small scale, so we know they work. The next - very challenging step - is to scale them up and make them commercially viable. That needs time and money. So let’s not waste any more time and provide funding. 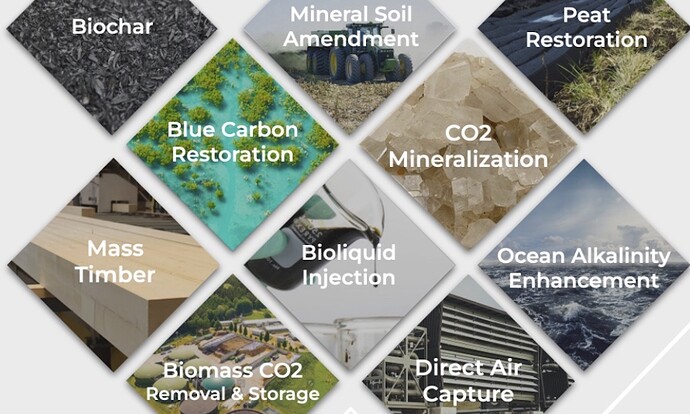 It is true that most methods of CDR, short of reforestation/afforestation and traditional soil amendment methods, are fairly new and relatively early in development. Very few people were thinking about CDR ten or even five years ago.

Is that a bad thing?

We all wish we were further along in developing cheap and readily available CDR solutions that could be broadly implemented. We are not, which is exactly the reason we need to invest now to make sure we get there around mid-century.

There’s a difference between “untested/theoretical” and “ready for commercial use”.

A lot of CDR technologies have been tested and work well. Take DAC: versions of DAC have been used to keep the air in submarines and the space station breathable. Tested, proven.

Or enhanced weathering: rock weathering by binding CO2 is a natural process that happens fairly slowly. By grinding up the rock, this reaction can be accelerated. The underlying chemistry of these reactions is well understood.

What these technologies are mostly not, yet, is commercial. There are a handful of DAC plants that exist to prove the concept more than to remove large quantities of CO2. To make sure they get from where they are to being viable gigaton-scale solutions is what we at OpenAir are focusing on.

Here is another quote:

“The only way to really know how these systems perform in practice, is to go build them,”
David Victor, a professor of public policy at the University of California, San Diego

CO2 Sequestration is not new

The world’s oldest CO2 sequestration effort started in Norway in 1996 and has sequestered just under a million tons of CO2 each year. The facility was built by the Norwegian company Sleipner to avoid a CO2 tax. The CO2 is captured and stored in a deep saline reservoir 800-1000 meters (2600-3300ft) below the sea floor.

“There is no evidence of CO2 leakage and the CO2 remains in situ. CO2 capture is done using amine technology. Injection currently costs $17 US/Ton CO2.”

Importantly, this shows that 20 years in (the data is from 2016), CO2 can be safely sequestered at a manageable cost using the same (or a similar) technology for capture (amine-based) as modern DAC plants do.

We do new stuff all the time

The argument that something can’t or shouldn’t be done because it is untested seems disingenuous at best. Inventing and commercializing new things is what we do as humans and have been since very early in our development. Use of fire, agriculture, aqueducts, roads, telescopes, trains, cars, radios, fossil fuel plants, computers, 3D printing, reusable rockets, cancer treatments - all were at some point or still are new. That did not keep us from continuing to develop and deploy them.

Things didn’t always go smoothly and as planned. Edison thought he could crank out a light bulb in three or four months. It took him 14 months and $850,000 in today’s money to make one that burned a bit more than half a day.

Had he given up after three months would we still be using gaslight and candles? Probably not, but it might have taken many more years to get a functioning light bulb.